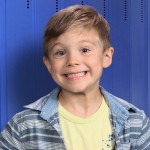 I began helping children diagnosed with Brown’s Syndrome when a one of my Rolfing Structural Integration clients told me her son had been diagnosed with it. She was told there was nothing that could be done to fix it, except surgery and even that wasn’t a guarantee. I questioned her as to when the symptoms started and I wondered what happened to him that caused a normal child to develop these symptoms. She said he had fallen from a pretty high off the ground and he landed head first on concrete. He was only one year old at the time and within one year of the fall these symptoms appeared.  I asked to see the child and during the first appointment, something amazing happened, the adhesion’s in his head and around his brain released and the symptoms disappeared, about 90%. Within two days of seeing me, his mom was very excited to say that he asked to take archery classes and his over sensitivity and emotional reactions we no longer an issue. I worked on him a couple more times and his Brown’s Syndrome symptoms disappeared.

That session awakened a curiosity that has become a passion and purpose in my work and I’m very excited to have the opportunity to help these children.

Patterns of strain throughout the body can affect up into the head too causing a pattern of strain that can manifest in many ways. The body is an endless web on connective tissue. Everything is connected and what happens in one end does affect rest of the body. Often, people will experience symptoms like headaches, TMJ Dysfunction, all kinds of body pain ranging from joints, hips, sciatic, bladder leakage, shoulder, back, head, and neck pain.  The good news is, connective tissue is also a plastic medium, meaning it can be molded and sculpted much like modeling clay, giving us the ability to reverse trauma from accidents and injuries throughout the body.

Research states; brain and head injuries are one the most common injuries suffered by drivers and passengers from car accidents. A closed head injury, which can range from a mild concussion to a traumatic brain injury (TBI) can greatly affect a persons’ life. Often, no physical sign of trauma shows up (i.e. cuts or bruises), however, the damage from  the brain being jostled inside the skull from the impact of a car crash or even a sports injury, can cause bruising and other injuries to the brain resulting in mild to severe memory issues, emotional sensitivity and even sensitivity to noise.

Closed head trauma causes tears in the connective tissue, even micro tears, resulting in inflammation and adhesions in the head and around the brain. As these tears heal, adhesion’s in your connective tissue can literally pull the brain out of balance and inhibit the function of nerves and arteries. This pull seems to be affecting the eyes.

Most of the calls I’m receiving about children, parents describe a difficult childbirth or birth trauma and even forceps delivery.  Brown’s Syndrome began to show up over time. Now, my question is; what other problems like this are out there from a birth trauma? Even seemingly normal children can cause these types of stress on a child.

How do I release these adhesions?

I place my hands gently on the head and feel deep into the head beyond the cranial bones. I feel the pattern of strain and slowly and gently release the adhesion’s in the head.

With the right help, the body has an amazing ability to heal.

Beck is doing so well. It took some time to determine the actual improvement in his vision, but now it’s apparent that the improvement is profound. He read and typed up book reports on three classic (read long, small print) novels for summer school work. He still does not have full range of motion in his left eye but the movement is significantly improved and he claims to never have double vision anymore. I would be delighted to act as a reference for your work anytime and will post a testimonial on Little Four Eyes later this week.

Beck’s eyes are so much improved, they almost seem to have equal range of motion.

His treatments weren’t a magic wand erasing all of his struggles but I cannot imagine where we would be right now if he was still trying to manage life with Brown Syndrome.  Now that his vision is improved we’re tackling his issues with ADHD, an underdeveloped prefrontal cortex and his academic delays from years of seeing double. Have you done work with children with ADHD?

We would love to see you again when you come to Texas. When do you think that will be?

“My eyes were always hurting so I spent a lot of time closing one eye so I wouldn’t see double. I had trouble looking at papers and staying focused on reading and stuff. Finally, my mom said that I needed to get surgery and that was the only option left. Then we found out that it wasn’t the only option. We could do cranial sacral therapy and that helped a lot. Now I can focus on what’s going on in school. I have more interest in reading and math is a lot is easier. There is less strain on my eyes and I don’t have headaches.”